LSC requests an appropriation of $652,600,000 for FY 2021. This request reflects an increase of $59.6 million over last year’s request of $593 million. Nearly 95% of the request would fund 132 local legal aid organizations in all 50 states, the District of Columbia, and the Territories. LSC estimates that this would enable LSC grantees to provide assistance with 60% more civil legal problems than they currently serve.

Last year, LSC used its 2017 Justice Gap Report as the basis for determining the level of funding necessary to narrow the justice gap. LSC’s FY 2021 recommendation is based on a new “intake census” of all LSC grantees that focused on financially eligible individuals who sought assistance for civil legal problems during a four-week period in 2019. The 2019 intake census showed that 42% of the eligible legal problems presented received no service of any kind—an increase of one percentage point from the 2017 survey.

LSC’s funding request for FY 2021 reflects the overwhelming need for civil legal services to fulfill America’s pledge of “justice for all.” Millions of Americans qualify for LSC-funded services, but the majority of them are not able to receive the legal assistance they need because LSC’s appropriation has been inadequate to meet their needs. The request would allow LSC grantees to make substantial progress serving those persons who seek legal aid but currently receive insufficient services or no service at all.

The table below compares LSC’s request by budget category for FYs 2020 and 2021. Basic field grants, which support the day-to-day operations of LSC-funded civil legal aid programs, represent the largest component of LSC’s budget request. For FY 2021, LSC requests $608.8 million for Basic Field Grants to narrow the “Justice Gap” as measured by the percentage of eligible legal problems LSC’s grantees must turn away with no help of any kind.

The table below reflects LSC’s current funding compared to LSC’s and the White House request for FY 2021.

An estimated 57.3 million people, or 17.8% of the U.S. population, were eligible for LSC-funded services in 2018, the most recent year for which Census Bureau figures are available. The eligibility standard is 125% of the Federal Poverty Guidelines. The following map illustrates the geographic location of the population eligible for LSC-funded services across the United States in 2018.

LSC’s congressional appropriation represented 34% of the total funding LSC grantees received in 2018, the most recent year for which LSC currently has grantee reports. LSC’s appropriation today is far lower in inflation-adjusted dollars than it was forty years ago. If LSC’s funding in 1980 had kept up with inflation, its funding today would be $879 million.

LSC grantees leverage the funding they receive from our congressional appropriation with private contributions and state and local funding. Thirty-four grantees received 50% or more of their total funding from LSC in 2018. The following map shows the percentage of Basic Field funding that grantees in each state received from LSC in 2018.

Last year, LSC used its 2017 Justice Gap Report as the basis for determining the level of basic field funding necessary to narrow the justice gap. LSC’s FY 2021 recommendation is based on a new intake census of all LSC grantees that focused on financially eligible individuals who sought assistance for civil legal problems during a four-week period in March and April of 2019. The 2019 census showed that:

If Congress fully funds LSC’s request of $608.8 million for Basic Field grants, LSC grantees could provide some level of service for 60% more civil legal problems than they currently serve.

The Washington State study also found high percentages of low-income persons could resolve some or all their legal problems when they had legal assistance. For example, for those who were able to get some level of assistance: 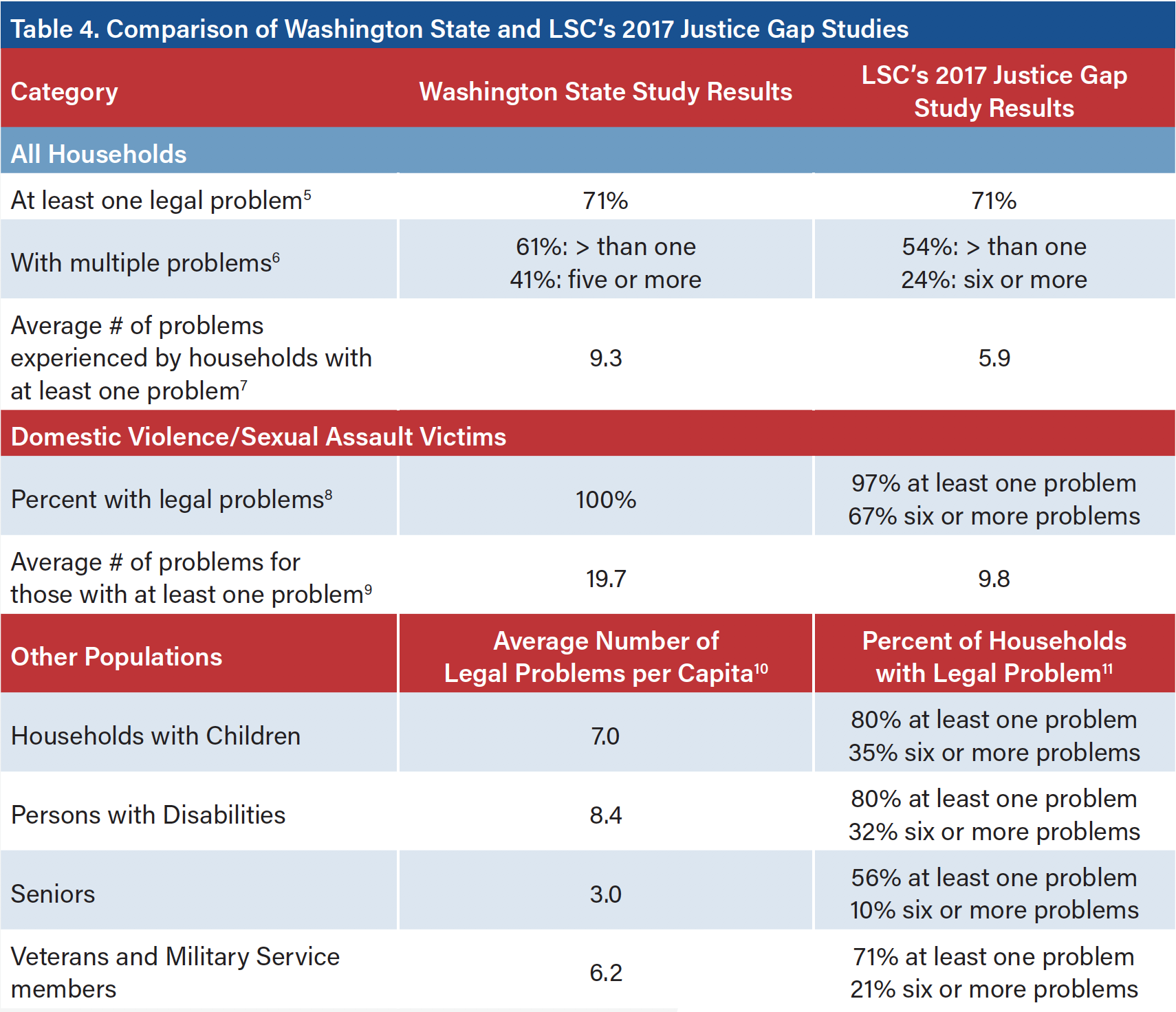 State studies also consistently show that the clear majority of civil legal cases include at least one unrepresented party. In some states and in some types of cases, as many as 80%-90% of litigants are unrepresented, even though their opponent has a lawyer. The traditional adversarial model where both parties have legal representation is not the norm.

Table 6 highlights a sample of states showing the percentage of represented parties in state courts in debt collection, eviction/landlord-tenant, and small claims cases. 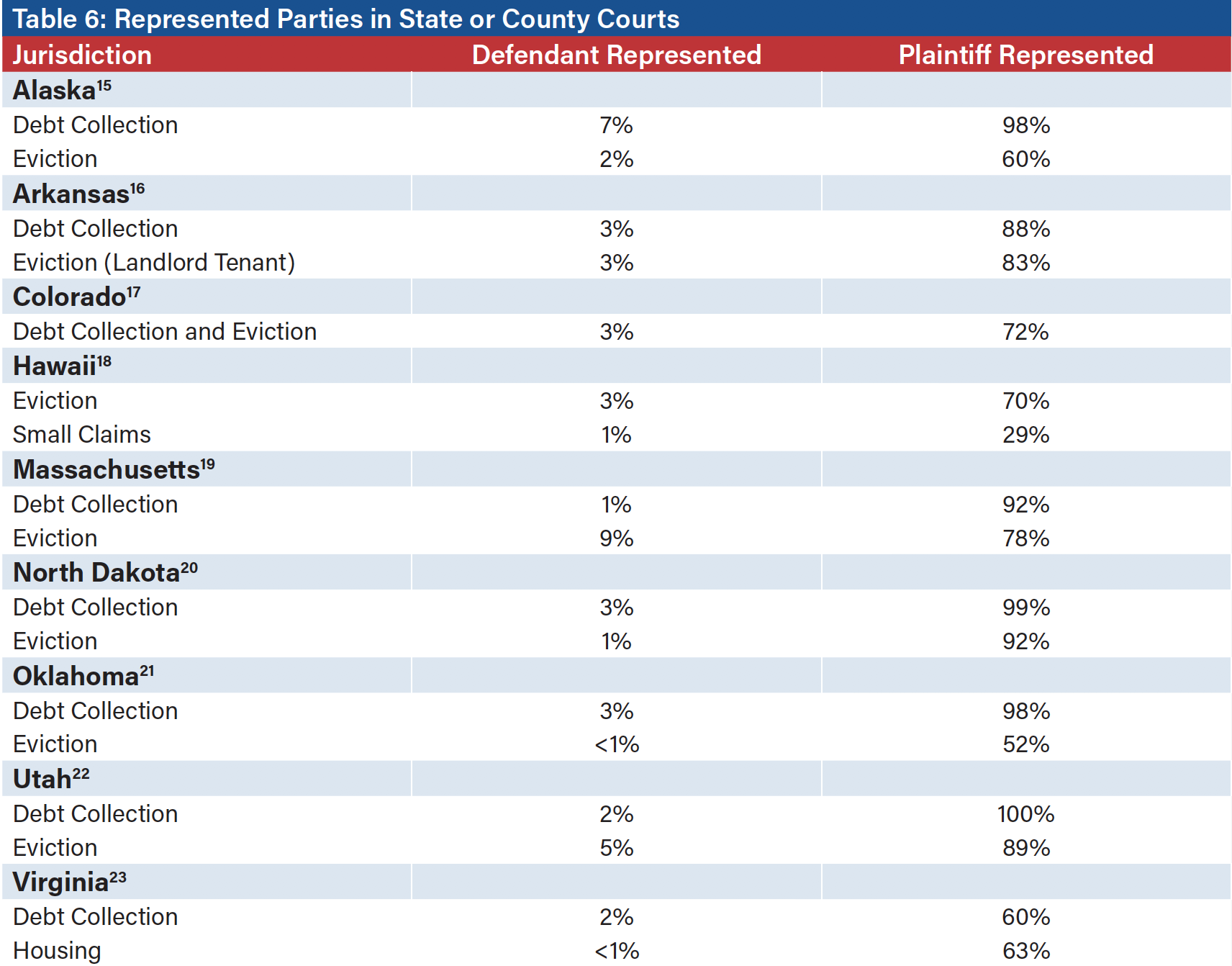 Impact of Not Having a Lawyer

The large number of unrepresented litigants is compromising the ability of the courts to provide equal justice to low-income people. Numerous studies have shown that represented parties have substantially higher success rates than unrepresented parties. Vulnerable populations such as persons with mental disabilities, domestic violence survivors, and those with limited proficiency in English are especially disadvantaged.

Recent studies have focused on low-income tenants facing evictions without an attorney. In many jurisdictions, reports show that nearly 90% of landlords are represented by counsel, while 90% of tenants are not. Having a lawyer increases the odds of being able to stay in one’s home. For example, a New York City study found that unrepresented were evicted in nearly 50% of cases while represented tenants were able to stay in their homes 90% of the time.

Impact of Unrepresented Litigants on the Court System

For the past several years, LSC has heard from judges across the country about the negative impact that the increasing number of unrepresented litigants has on the nation’s justice system. Large numbers of unrepresented litigants clog the courts, take up the time of court personnel, cost opposing parties more in legal fees because of disruptions and delays; cause more cases to advance to litigation, which means that fewer cases are settled, and result in cases being decided on technical errors rather than the legal merits.

The relationship between basic field funding and case closures provides an important measure of the efficiency of the public investment in LSC as an organization and the provision of direct civil legal services to low-income households.

Case closures alone do not present a complete picture of the range of services LSC grantees provide. Grantees provide extensive other services, including providing legal information and materials that enable low-income people to learn how to enforce important legal protections. These numbers provide a broader measure of the scope of LSC grantees’ reach into their local communities and the many people with whom grantees share informational resources.

In 2018, more than 11 million people visited grantee websites for information and assistance. These websites provide information about where to find legal help; court locations, procedures, and forms; and a wide range of self-help resources to identify and pursue appropriate legal remedies, including videos, classroom modules, fact sheets, and automated systems to generate and download ready-to-file court forms.

Grantees provided legal information to an additional 1.46 million low-income people at other venues and events:

The information provided at these venues helps low-income people better understand their legal rights. Court help desks can take many forms. Grantee staff and volunteers help individuals understand court procedures and navigate the process to represent themselves. They can also provide legal information to targeted populations. For example, at the request of the Maine Judicial Branch, Pine Tree Legal Assistance staff and volunteers conduct court-based “information sessions,” which provide homeowners with information about the foreclosure process.

Grantees often provide one-on-one legal information to low-income persons in tandem with group legal education clinics. At the conclusion of these events, grantees provide follow-up information to individuals on a one-on-one basis. After a grantee has identified areas of the broadest concern that can be easily explained in group settings, attorneys prepare a curriculum and self-help materials for use throughout the local community.

Outreach Events And Collaborations With Partners

Grantees also conducted over 10,000 outreach events for partner organizations, such as bar associations, other legal service providers, and social service agencies. For example, grantees participate in veteran’s “stand downs” or collaborate with their state’s Veterans Affairs offices and VA medical centers. Many grantees have medical-legal partnerships to educate health personnel about the types of legal problems that lawyers can help remedy.

LSC grantees made 590,000 referrals to non-legal entities and other legal services organizations or attorneys in 2018. These numbers highlight the relationship that LSC grantees have with other stakeholders in the community that serve low-income individuals.

The Value of Investing in Civil Legal Aid