The Legal Services Corporation (LSC) conducts research measuring the "justice gap" - the gap between the need for civil legal assistance among low-income Americans and the resources available to meet that need. 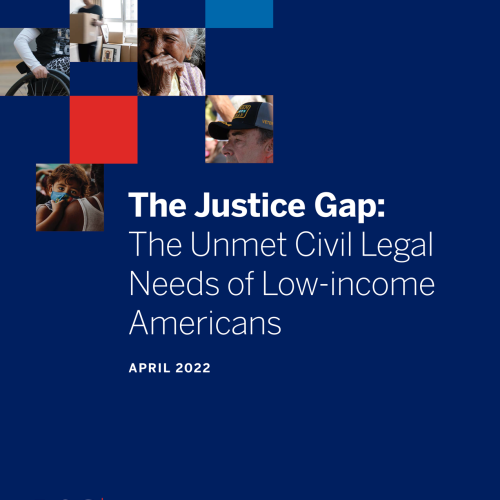 LSC’s Justice Gap Research advances our commitment to funding civil legal assistance for Americans who would be otherwise unable to afford it.  Our research provides high-quality data about the gap between the need for civil legal assistance and its availability in low-income America, used to advance LSC’s advocacy efforts.

To date, LSC has published four studies documenting the justice gap as part of its Justice Gap Initiatives.

The first study was published in 2005 and showed that for every person helped by LSC-funded organizations, another was turned away because they  did not have sufficient resources to help. The second Justice Gap study, published in 2009 using the same methodology as the 2005 study, confirmed that the justice gap among low-income Americans remained just as large as it had been in 2005.

In 2017, LSC released a third, comprehensive, Justice Gap study entitled: “The Justice Gap: Measuring the Unmet Civil Legal Needs of Low-income Americans.”  For the 2017 report, LSC developed a more expansive methodology that included a national survey of low-income households administered by NORC at the University of Chicago. The report revealed that, in the prior year, 86% of the civil legal problems reported by low-income Americans did not receive any or enough legal help.

The 2017 Justice Gap Study also found that 71% of low-income households in the country had experienced at least one civil legal problem in the prior year. One in four low-income households experienced six or more civil legal problems, including 67% of households with survivors of domestic violence or sexual abuse. These problems included critical issues such as veterans’ benefits, domestic violence, disability access, poor housing conditions, debt issues and health.

In April 2022, LSC released its fourth Justice Gap study, “The Justice Gap: The Unmet Civil Legal Needs of Low-income Americans.” For the 2022 study, LSC once again partnered with NORC at the University of Chicago, surveying more than 5,000 American households of all income levels to provide an up-do-date baseline measure of civil legal need and insights into help-seeking behaviors of people facing civil legal problems, like eviction, foreclosure, domestic violence, and child custody disputes. The survey also asked about the impact of the COVID-19 Pandemic on American families. Additionally, LSC grantees tracked all the people who came to them for help and how many were turned away.

In 2017, LSC partnered with NORC at the University of Chicago to survey 2,000 low-income households. The report revealed that 86% of the civil legal problems reported by low-income Americans in the past year received inadequate or no legal help.

In 2009, LSC documented the justice gap, showing that for every client served by an LSC-funded program, one person who seeks help was turned down because of insufficient resources.

In its 2005 report, LSC developed a methodology to measure the justice gap and showed that for every person helped by LSC-funded programs, another was turned away because programs did not have sufficient resources to help.