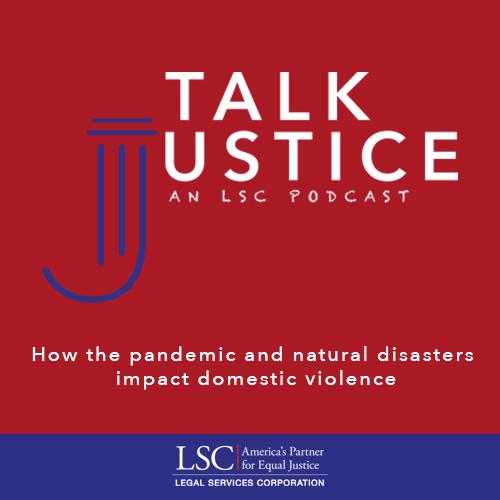 How the pandemic and natural disasters impact domestic violence

Experts discuss how the pandemic and natural disasters affect domestic violence survivors on the latest episode of Talk Justice. Their conversation highlights how the legal system is responding to the increased threat.

Judge Jason Dodson was appointed to the 21st Judicial Circuit in 2016. Judge Dodson’s judicial assignments have included domestic relations cases. He earned a B.A. from Bates College and a J.D. from Washington University School of Law.

Judge Dodson is a member of The Missouri Bar, the Bar Association of Metropolitan St. Louis, the Mound City Bar Association, the Women Lawyers’ Association and the St. Louis County Domestic Violence Council. He serves on the Supreme Court of Missouri’s Child Support Guidelines Subcommittee, Committee on Access to Family Courts and Family Court Committee. He volunteers with Annie’s Hope, the Bereavement Center for Kids and is an active member of his church. He also serves as a speaker on family law, domestic violence and pro bono legal representation.

TeAndra has been a legal aid lawyer for nearly her entire 28-year legal career. After earning her J.D. from N.C. Central University School of Law, she became a family law attorney with East Central Community Legal Services in Raleigh, the predecessor to LANC’s Raleigh field office. TeAndra left legal aid for private practice for a short time but returned in 1999 and has focused on domestic violence ever since.

As the head of Domestic Violence and Sexual Assault Practice Group, TeAndra coordinates the delivery of legal services to survivors across the state. She ensures that advocates in every field office have the training, supervision, and resources necessary to provide consistently high-quality and compassionate representation to some of LANC’s most vulnerable clients. Drawing on deep relationships with local partners, TeAndra also serves as the public face of LANC’s DV/SA advocacy by conducting fundraising, outreach and training to law enforcement, social services agencies, the larger legal community, and other stakeholders at the local, state, and national levels.

TeAndra has served on a variety of local and statewide task forces that focus on domestic violence and sexual assault. She is currently a member of the N.C. Equal Access to Justice Commission, the Administrative Office of the Court's Family Court Committee, and the N.C. Domestic Violence Commission.

TeAndra lives in Wake County, NC with her husband. They have two daughters and three grandchildren.

Pamela Roychaudhury received a Bachelor of Arts in Political Science from the University of Missouri at Columbia in 1998. She received her Juris Doctorate in 2001 from the University of Missouri at Kansas City. She was a staff attorney with Legal Aid of Western Missouri (LAWMO) from 2001 to 2014. In 2015, Ms. Roychaudhury became the Managing Attorney of the Joplin Office, managing a staff of 5 attorneys, 3 paralegals and 1 support staff. As a staff attorney, Ms. Roychaudhury was a member of the Domestic Unit in the Kansas City office of LAWMO from 2001 to 2007, specializing in the representation of victims of abuse in divorce, paternity, custody and orders of protection. She also served as Guardian ad Litem in child orders of protection. In 2007, she joined the Joplin office of LAWMO as their VAWA-STOP grant attorney representing victims of abuse in orders of protection. She continues to represent victims of abuse in family law matters and represents many clients in housing, consumer, probate and income maintenance cases. She is licensed in Missouri and Kansas.

Recently, she has authored numerous articles and reports including: Liberty and Economic Justice for All; Pay Equity: Restoration and Improvement; Promises to Keep: The Impact of the Voting Rights Act in 2006; The VRA Today: Why Americans Still Need the Voting Rights Act; Working in the Shadows: Ending Employment Discrimination for LGBT Americans, and Cracks in the System: Twenty Years of an Unjust Federal Crack Cocaine Law. Her reports have inspired town hall meetings across the country, and Vagins’ words and work have been featured by Washington Post, AP, CQ, NPR, Huffington Post, Daily Kos, and others.