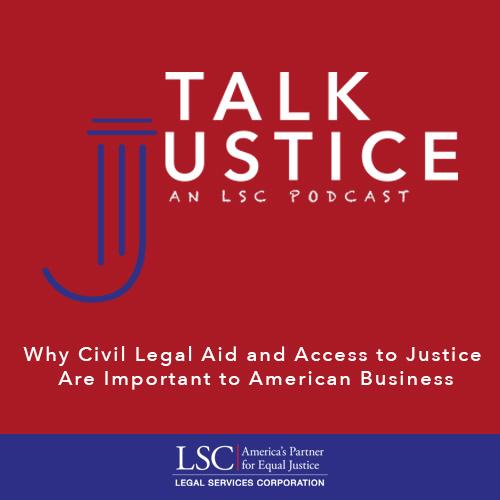 In the latest episode of Talk Justice, prominent leaders discuss the business community’s perspective on the importance of access to justice during the pandemic.

Kenneth C. Frazier is Executive Chairman of Merck’s board of directors, after stepping down as CEO on July 1, 2021.  He is co-chair of the Legal Services Corporation’s Leaders Council.

He previously served as President and Chief Executive Officer of Merck since 2011. Under Ken’s leadership, Merck delivered innovative lifesaving medicines and vaccines as well as long-term and sustainable value to its multiple stakeholders.  Ken substantially increased Merck’s investment in research, including early research, while refocusing the organization on the launch and growth of key products that provide far-reaching benefits to society.  He also led the formation of philanthropic and other initiatives that build on Merck’s 130-year legacy.

Ken joined the company in 1992 and held positions of increasing responsibility, including General Counsel and President.  Prior to joining Merck, Ken was a partner with the Philadelphia law firm of Drinker Biddle & Reath.

He sits on the boards of PhRMA, Weill Cornell Medicine, Exxon Mobil Corporation, Catalyst, the National Constitution Center, and Cornerstone Christian Academy in Philadelphia, PA.  He is co-founder and co-chair of OneTen, a coalition of leading organizations committed to upskilling, hiring, and promoting one million Black Americans into family-sustaining jobs.  OneTen is committed to facilitating a meaningful, measurable, and lasting impact on racial and economic justice.  Ken also is a member of the American Academy of Arts and Sciences, the American Philosophical Society, The Business Council, the Council of the American Law Institute, the American Bar Association, and a Fellow of the College of Physicians of Philadelphia.

Teresa Wynn Roseborough is responsible for The Home Depot’s legal functions, government relations, corporate communications and external affairs. In addition, as corporate secretary, Teresa serves as a liaison between the board of directors and the company and is responsible for all corporate governance matters.

Teresa and the legal team are responsible for securities, litigation, employment, mergers and acquisitions, real estate, store operations, risk management and intellectual property. She also leads the government relations team as they address legislative issues that impact the business environment, the retail industry and our associates. In her corporate communications and external affairs role, Teresa leads the company’s internal and external communications, The Home Depot Foundation, The Homer Fund, branded merchandise and the events team.

Before joining The Home Depot in 2011, Teresa held several positions in the legal department of MetLife, and she was formerly a partner in the firm that is now Eversheds Sutherland. Teresa’s more than 30 years of legal experience also includes government service as deputy assistant attorney general for the U.S. Department of Justice; law clerk for Justice John Paul Stevens of the U.S. Supreme Court and Judge James Dickson Phillips of the U.S. Court of Appeals for the Fourth Circuit; and an employee of the Department of Defense in West Germany.

David M. Rubenstein is a Co-Founder and Co-Chairman of The Carlyle Group, one of the world’s largest and most successful private investment firms. He co-founded the firm in 1987. Since then, Carlyle has grown into a firm managing $260 billion from 29 offices around the world.

He is chairman of the Boards of the John F. Kennedy Center for the Performing Arts, the Council on Foreign Relations, and the Economic Club of Washington; a Fellow of the Harvard Corporation; a Trustee of the National Gallery of Art, the University of Chicago, Memorial Sloan-Kettering Cancer Center, Johns Hopkins Medicine, the Institute for Advanced Study, the National Constitution Center, the Brookings Institution, and the World Economic Forum; and a Director of the Lincoln Center for the Performing Arts and the American Academy of Arts and Sciences.

He is a member of the American Philosophical Society, Business Council, Harvard Global Advisory Council (Chairman), Madison Council of the Library of Congress (Chairman), Board of Dean’s Advisors of the Business School at Harvard, Advisory Board of the School of Economics and Management at Tsinghua University (former Chairman), and Board of the World Economic Forum Global Shapers Community. He has served as Chairman of the Board of Trustees of Duke University and the Smithsonian Institution, and Co-Chairman of the Board of the Brookings Institution.

Mr. Rubenstein is an original signer of The Giving Pledge, a significant donor to all of the above-mentioned non-profit organizations, and a recipient of the Carnegie Medal of Philanthropy, and the MoMA’s David Rockefeller Award, among other philanthropic awards.

In this role, John heads the Operations, Legal and Administrative Affairs organization which comprises a variety of business functions including the Legal Department, Ethics and Compliance Office, Data Office, Global IT, Global Real Estate, Corporate Affairs, and Global Security. With John’s proven leadership and pan-HPE view of the business, he also leads the Transformation Office, a cross-business team that functions as the driving force to accelerate HPE’s vision to be the edge-to-cloud company.  As a result, John also leads the newly created Services Reliability Engineering (SRE) and Cloud Services Operations teams, as well as the Unified Cloud & Platform Experience Office. Prior to his current role, John served as Chief Legal and Administrative Officer overseeing most of the same organizations.

Before joining HP, John was a partner in the litigation practice of Morgan Lewis & Bockius LLP, focusing on complex litigation and primarily defending consumer class-action, fiduciary liability, and technology-related commercial litigation. He was previously a partner at Drinker Biddle & Reath, where he also specialized in commercial and product liability litigation.