Robert J. Grey Jr. was nominated to serve on the Board of Directors of the Legal Services Corporation by President Barack Obama on August 6, 2009, and his nomination was confirmed by the U.S. Senate on March 19, 2010.

Grey was elected as the President of the Leadership Council on Legal Diversity (LCLD) in 2012. He has presided over the rapid growth of LCLD and has engaged more than 350 of the nation’s top legal professionals—chief legal officers of corporations and the managing partners of America’s leading law firms. Prior to his current position, Grey was a Partner at Hunton Andrews Kurth LLP, where he served as Vice Chair of the firm's Pro Bono Committee and represented businesses in administrative, regulatory, and legislative matters. From 1998 to 2002 he served as chair of the American Bar Association’s (ABA) House of Delegates. He was elected President of the ABA in 2004 and was the second African American to hold the position. During his term as President of the ABA, Grey worked to improve the nation’s justice system by launching the America Jury Project, which led to the adoption of the ABA Principles for Juries and Jury Trials. Grey received his B.S. in 1973 from Virginia Commonwealth University and his law degree in 1976 from Washington and Lee University, where he served on the Board of Trustees from 2006 to 2014. 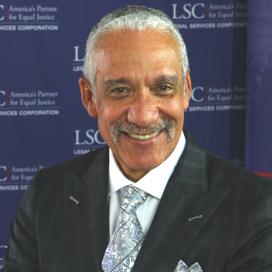